You are at:Home»Features»A Tasty Twist 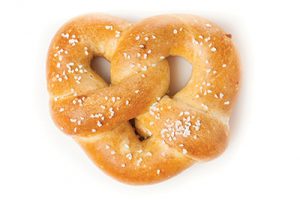 As pretty much anyone knows, pretzels are traditionally dough formed into the shape of a knot before being baked. Their shape is distinctively symmetrical, with the ends of a long strip of dough intertwined and then twisted back onto itself in a loop. Generally speaking, pretzels are seasoned with course salt, which complements the process of using sodium carbonate or lye to create their signature skin and flavor, and their loops may have once served a practical purpose, as bakers of old could hang them on sticks.

These days, pretzels come in all shapes, sizes, forms, and even flavors. Bits, bites, sticks, minis…salty, sweet, savory, spicy…hard or soft. And it’s understandable. They’re tasty enough on their own merits but neutral enough in flavor to be the perfect canvas for a wide range of spices and flavorings, making them wildly appealing and extremely popular as a snack. Add to that the fact that they’re low in fat (unless, of course, you get one of the fully-loaded versions that make them the equivalent of a decadent dessert), and you’ve got the perfect way to munch without feeling terribly guilty. But just where did these baked delights get their beginnings? 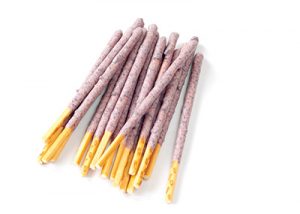 There are many unreliable stories surrounding the origin of pretzels, as well as the origin of their name, though most accept the idea that they were invented by European monks. Popular legend has it that an Italian monk invented pretzels as a way to reward children who learned their prayers and that he called the strips of baked dough, which he had folded to resemble arms crossing the chest, “pretiola”—Italian for “little reward.” Other stories credit the invention of the pretzel to a monastery in southern France, while Germany holds to the story that pretzels were the invention of anxious bakers who were being held hostage by local dignitaries. The German name “Brezel” may derive Latin terms meaning “bracelet” or “little arms.”

Other popular stories assert that pretzels were invented by a Christian monk to represent arms crossed in prayer to the Trinity, while some modern scholars believe the pretzel to be a symbol of human sacrifice to a Celtic goddess. In the Christian church, pretzels were once considered to have religious significance for both their ingredients and their shape. Pretzels made using only flour and water could be eaten during Lent, when eating eggs, lard, or dairy products such as milk and butter were forbidden. Over time, pretzels became associated with both Lent and Easter, and pretzels were hidden on Easter. 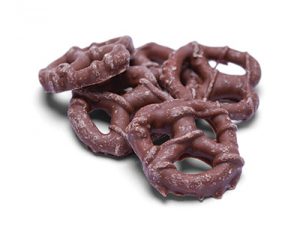 Fast-forward to the late 18th century, and you’ll see the presence of the traditional soft pretzels pop up in Pennsylvania, where many German immigrants made their homes. As their popularity spread, the rest of the country began to fall in love and even eventually welcomed the advent of the hard pretzel in 1850; and by the 20th century, larger cities were mass-producing pretzels of both kinds. So important to Pennsylvania’s history and economy is the pretzel, in fact, that Pennsylvania governor Ed Rendell declared April 26 to be “National Pretzel Day” in 2003.

Regardless of whether one prefers hard or soft, one of the beautiful things about pretzels is that they can be eaten at any time, for any occasion. Snack time, lunch time, even during cocktail hour—depending, of course, on how much they’ve been dressed up or down. For some, the simplicity of course salt isn’t enough, and popular ways to impart flavor and interest to the humble pretzel are the addition of cheese, sugar and cinnamon, chocolate, glazes, nuts, and butter, though the imagination would hardly limit the possibilities. Of course, soft pretzels should be eaten when fresh, while hard-baked pretzels allow a greater window of opportunity for consumption.