You are at:Home»Features»Angels in the Blue

As an elite team of pilots known for their breathtaking stunts, precise chorography, and awe-inspiring speed as they fly through the air performing aerobatic stunts, the Blue Angels have long been a part of the fabric of America’s patriotism and pride, demonstrating just how amazing the pilots of our military truly are. Since their official formation in 1946, they have performed for more than 260 million spectators all across the nation, becoming one of the top American air shows for their ability to do the seemingly impossible and soar beyond imagination. 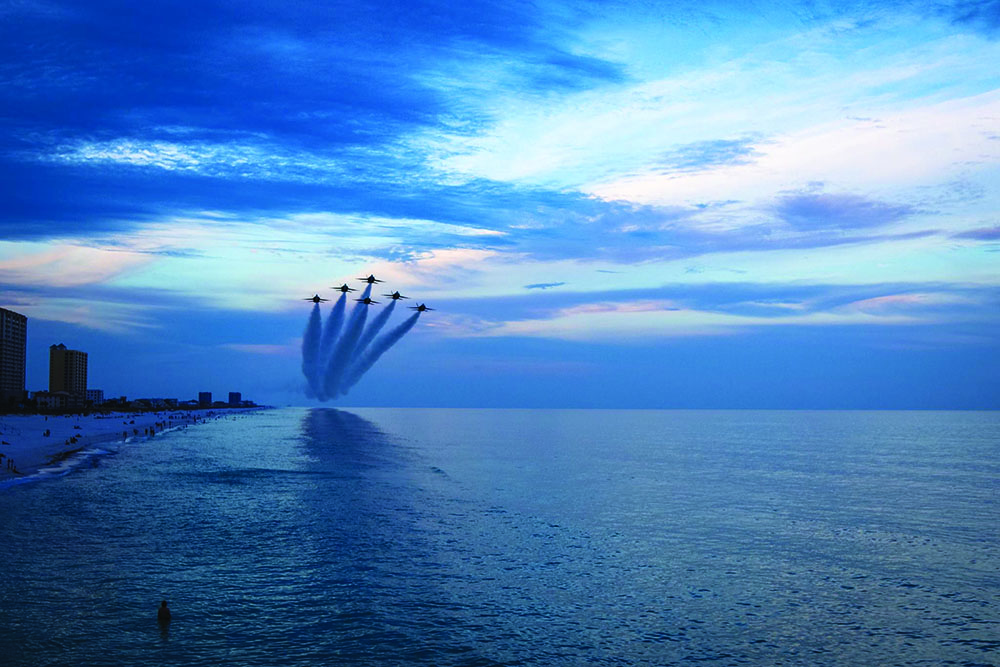 Living in Pensacola, we’ve got a certain amount of pride that no one else has for this select team of individuals. This is their home base; this is where they land. This is where they do their flight-checks and run their practice maneuvers, where the sharp lines of their unmistakable blue outlines shatter the sound barrier and tear through the sky as they perfect every detail to the very last second. And each year after they traverse the country performing for audiences who have watched them for years as well as those of an entirely new generation, they come home to the people of Pensacola and give us all a thrill that chills us to the core and reminds us how proud we should be of our nation and our military. 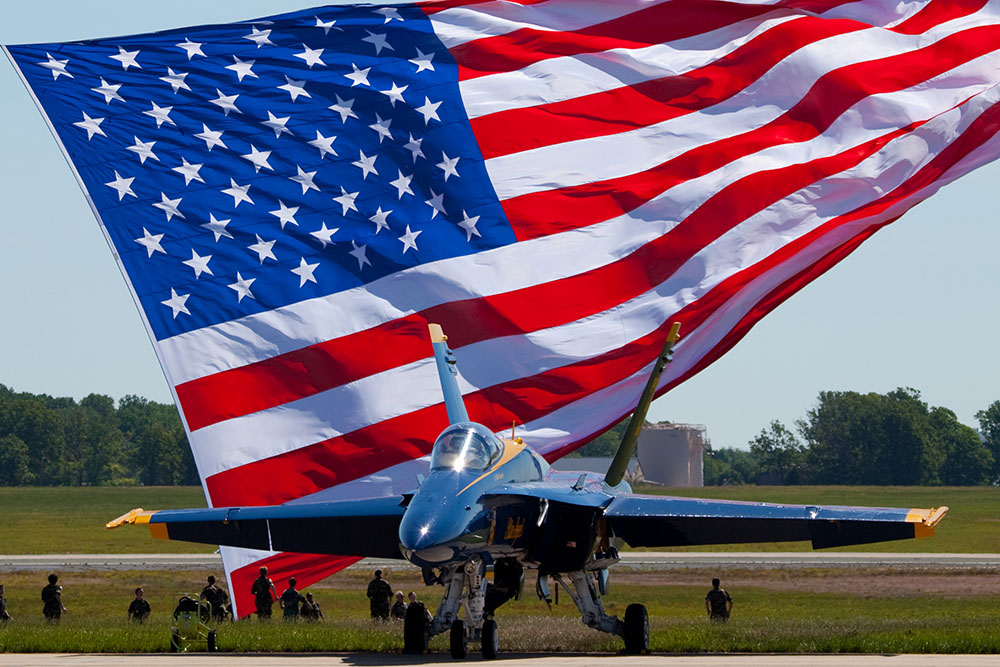 “WASHINGTON, DC, ANDREWS AIR FORCE BASE, USA – MAY 14, 2010: Famous Blue F-18 Hornet of the US Navy Demonstration Squadron Blue Angels park on the TAMRAC in Andrews AFB before Air Show. In the background Flag of United States of America flown by the parachute jumper Paul MCCowen.”

Highly dedicated to their craft, the Blue Angels flight demonstration team combines the very best and brightest members of the United States Navy and Marine Corps, bringing them together with one mission: to inspire wonder in all who see them perform, and they do it all without missing a move. Throughout the show, the Blues fly six F/A-18 Hornet aircraft, splitting into the Diamond Formation and the Lead and Opposing Solos, with most of the show alternating between signature maneuvers performed by the Diamond Formation and those executed by the Solos. It’s undeniably incredible to behold, and that’s why so many people flood the flight lines each year in every one of the cities where they perform—and Pensacola is proud to say that this is where they belong. 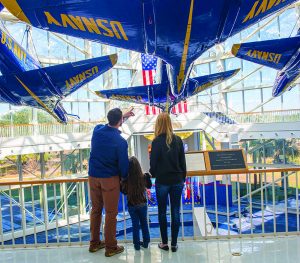 Here, we show them our support by turning out in droves to watch them, sitting through hours of traffic to get a glimpse of them in all their glory. And with good reason, as these select six are ours—our very own representation of the freedom that we fight for.

In addition to the Blues, the Blue Angels Air Show will feature demonstrations by Fat Albert—the Navy’s own larger-than-life C-130 Hercules—as well as the highflying acts of Julian McQueen, the Veterans Flight, Kevin Coleman, Gary Ward, Skip Stewart, and Redline, creating an astounding lineup of air-based wonders whose talents will keep your eyes glued to the sky and your jaw slack in amazement.

Over the course of a special “Blue Angels Week” leading up to the airshow, have breakfast at 8:00 a.m. with the Blues flying overhead at the beach on July 10. July 11, watch flight demonstration practice runs beginning at 2:00 p.m. On July 12, watch the full dress rehearsal with the Blues and the civilian acts beginning at noon. Come early to the beach to get a prime spot on July 13—show time starts at noon, and the Blue Angels will make their grand entrance at 2:00 p.m.

From loops through the clouds to adrenaline-pumping free-falls, the air show brings it all, making it the perfect way to get summer cleared for takeoff.

For more information on the show and bus service to the beach, visit www.visitpensacolabeach.com.