You are at:Home»Features»Orange You Glad You Live in Florida?

Long before the panhandle of Florida was the place of high-rise condos and fun beach bars, it had a surprising identity, an orange growing paradise. In the early 20th century, oranges grew aplenty in this area. When

turpentine and shingle businesses depleted the forest lands, the locals found that oranges grew nicely in their place. Orange Beach was even named as such because of the rows of orange trees that flourished there. However, the new crop’s success was short lived. While the orange growing business boomed below the frostbelt, deep freezes and hard times forced most local orange growers in the area to abandon the orange business and move on to other crops that were better suited to the climate, such as pecans. In recent years, milder winters and the evolution of heartier varieties of oranges have made it possible for the orange growing operations in the panhandle to have a resurgence.  Next time you order that sangria at one of our awesome local beach bars, the orange juice may be from just up the road.

Oranges (and orange juice-based drinks) not only have a positive impact on our brunch, they also have a positive impact on our health!  We all know that oranges and orange juice are the go-to when we’re feeling under the weather, but they can also help with our long term health. Recent studies have shown just how powerful these juicy fruits can be. Oranges have been shown to have a protective aspect against heart disease,

which is a leading cause of death in the U.S. They also have been identified to have a blood thinning affect if consumed regularly. Oranges can help with kidney stones and anemia as well. So, feel free to have another mimosa, you’re doing it for your health!

Satsuma oranges are the most common type of oranges grown locally. In fact, Jackson County was once known as the satsuma capital of the world, bringing around 35,000 people to the area for the Satsuma Festival from 1928-1929. Often referred to as satsuma mandarins, they are an easily peeled, juicy type of orange with few or no seeds. Satsumas do well in the panhandle area because they thrive in the cooler climate. In fact, growers say the more nights that fall below 40 degrees, the sweeter the crop. The fall harvest season is relatively short, only lasting from October through December.  When you’re at the store picking up your favorite football snacks, head on over to the produce section and check out the locally grown satsuma oranges. 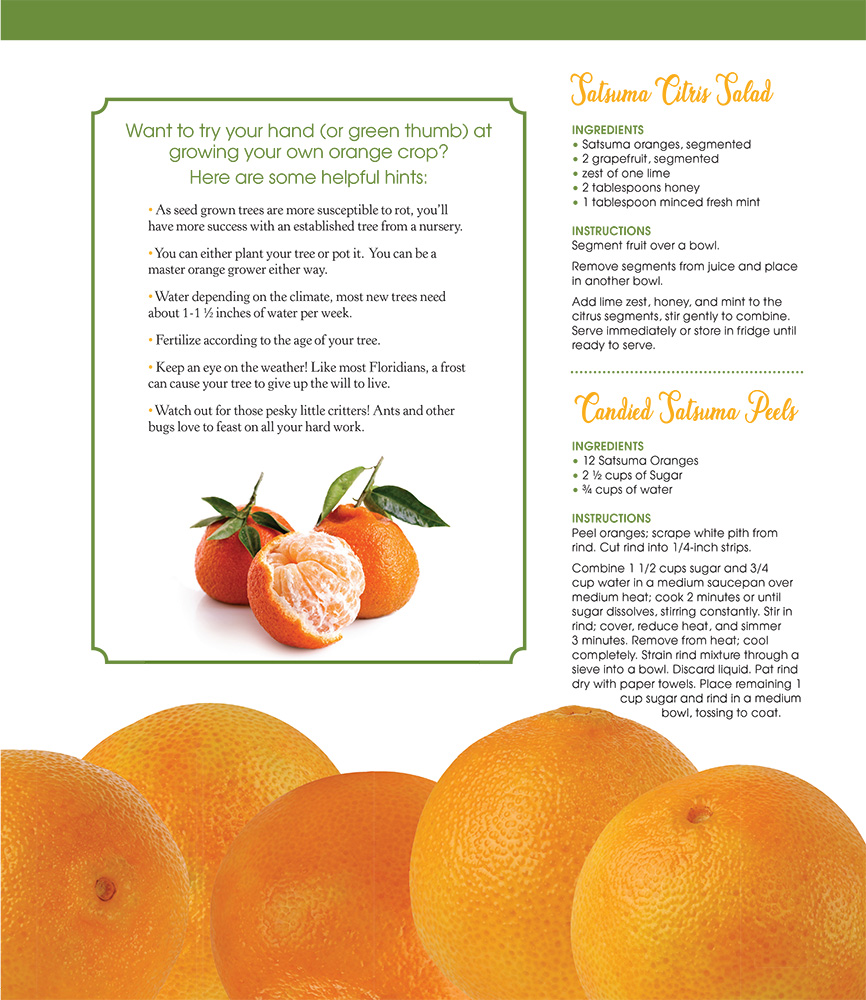