You are at:Home»Features»Pensacola Seafood Festival

If there are two things that Pensacola knows, it’s great seafood and how to throw a killer party, so it seems only natural that when those two things come together in one fun-filled weekend, it’s not something to be missed. And for countless people who have attended the Pensacola Seafood Festival over the past 42 years, it hasn’t been.

What started out as an attempt by the Pensacola Chamber of Commerce in 1977 to draw tourism to the area during the part of the year commonly called the “shoulder” season, the Seafood Festival once spanned two consecutive weekends in a row, setting up on Pensacola Beach one weekend and hitting the downtown scene for another. But as so often happens, it took off after a few years, growing to such an extent that it was eventually distilled into one spectacularly massive, festive event that now takes over the streets of downtown Pensacola and transforms it into a place where every inch of sidewalk, every patch of grass, and every street corner holds something new to taste, see, smell, hear, and experience.

Now under the organization of Fiesta Pensacola, the festival grows more each year in size and in popularity, drawing innumerable local patrons and thousands of visitors to the area to take part in the fun as well as attracting more than 170 artisans and craftsmen nationwide who travel to the city to participate. “Visitors to the Seafood Festival can expect one of the best festivals on the Gulf Coast,” says Margaret-Anne West, Fiesta Pensacola Event Coordinator. “Naturally, the event features a limitless supply of delicious seafood and other cuisines to savor, but it truly is a weekend filled with culture and entertainment, showcasing various musical acts as well as the creations of artists and crafters, both from the local area as well as from various areas all throughout the country. It’s a chance for people to get out and enjoy the richness of the community, to immerse themselves in historic downtown Pensacola, and to see what makes the city so special,” West continues. 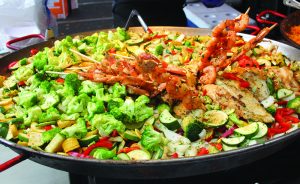 Hailed as one of the largest arts and crafts fairs in Northwest Florida, the Pensacola Seafood Festival is expected to boast more than 30 food vendors whose offerings scent the air with everything from fried and grilled seafood to burgers, chicken, and decadent desserts and snacks, as well as the wares of numerous artisans and crafts workers, a children’s area, live cooking demonstrations from area chefs, live music and entertainment, festival merchandise, and more. An admission-free event for all, the festival is indeed a reason to hit the streets and make a full weekend downtown part of your send-off to the summer.

“It’s always an exciting time for the city, and there are so many people who have made it an annual tradition for their families. No two years are ever the same, and we look forward to this year being every bit as fantastic as always,” West says. For those who have already been to the festival in years past, they are well aware of the excitement the weekend has in store; and for those who will be experiencing it for the first time, it’s just one more thing to love about Pensacola.

From soulfully cooked seafood to great entertainment and creative crafts that showcase the unique skill and talent of the hands that make them, there’s nothing like a good festival to bring everyone together to have fun, make some memories, and show their support for the local economy—and this one will definitely have you hooked.